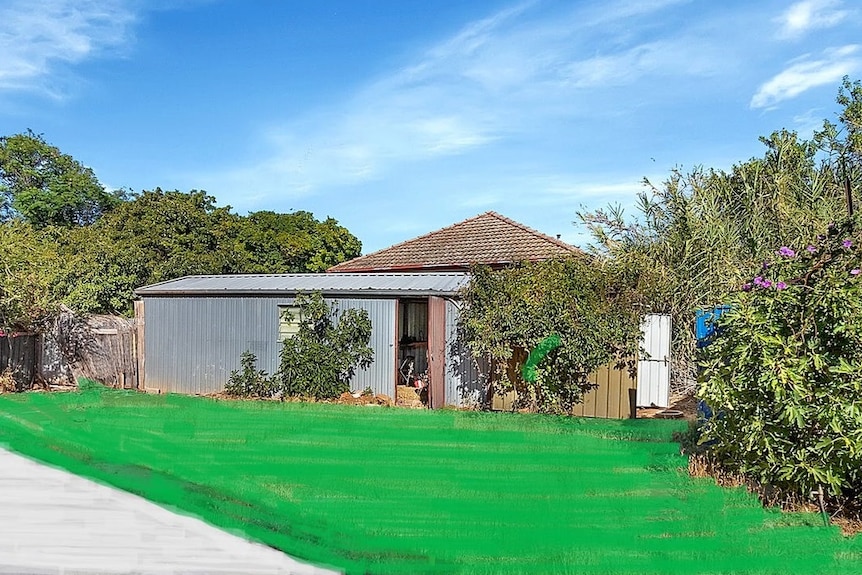 An advertisement for an Adelaide house with an unnaturally green lawn has amused many online, but has also sparked questions about how much enhancement is too much when it comes to real estate sales.

The house for sale in Elizabeth Downs, in Adelaide’s north, was noticed by a Reddit user who posted the image on the social media platform asking: “How do I get my grass this green?”

Both the front and back lawns of the house appear to be photoshopped over with a bright green colour.

“That’s the new strain of grass called ‘Chernobyl’, you should see it at night-time,” one Reddit user joked.

Another person said filters were OK “but using MS paint I don’t think is allowed”.

The agent selling the property, Sam Swami, said the grass at the property was “very dry” so he decided to fix it.

He expected anyone buying the house would come look at it.

“We photoshopped it to make it look good and they can see what’s there,” he said.

He said most people would be more interested in the land than the house or garden.

South Australia’s Land and Business (Sale and Conveyancing) Act states that real estate agents cannot use “a false or misleading representation for the purpose of inducing another person to sell or purchase land or a business”.

The photos in the advertisement have now been edited to crop out the grass.

“While it is a property professionals’ role to present a property in its best light to the market, REISA considers that any manipulation that misrepresents the property in anyway could be seen as false and misleading advertising,” Mr Cooke said.

Adelaide real estate photographer Thomas McNally said it was common for agents to ask for touch-ups such as removing oil stains from driveways or cracks from walls, but some had also asked him to remove stobie poles and water towers from images.

“Some agents are pretty ridiculous what they ask, but when people go to the property, they can see what it’s like,” Mr McNally said.

Virtual furniture could also make it easier for people to visualise how a house would look with their furniture in it, especially for new homes, he said.

He speculated that the Elizabeth Downs home with unusually green grass may have been done deliberately to gain publicity.

“It’s so bad that someone’s done that on purpose as a joke,” he said.

Last month, a North Adelaide apartment with a toilet in the living room raised questions about what was legal when it came to rental property standards.